Several years ago, naval architect Peter W. Sachse, owner of PSO Marine Transport, Inc. of Houston, foresaw a need for faster, better-designed crew/supply boats to serve the growing offshore oil industry. In 1977 he introduced just such a vessel, the PSO-I, a planing supply and passenger carrier of under 100 gross tons.

Designed according to careful application of marine and aeronautical principles, the PSO-I was seaworthy, fast, and economical.

Since that boat was delivered, Mr.

Sachse has been refining the design to create a vessel with even greater cargo capacity, speed, and operating economy. The result of his work, the Audrey (PSO-II) made her trial run recently at Morgan City, La.

The Audrey is a 100-ton-class vessel with a top speed (unloaded) of 40 mph. With an average load she makes 36 mph, and even heavily loaded still runs at 30 mph.

The new vessel carries up to 50 passengers and has an on-deck cargo capacity of 35 tons. Her fuel capacity is 3,500 gallons, providing a range of about 800 miles.

Mr. Sachse's design concept, refined from the PSO-I, is based on precise calculations of speed to length ratios, planing capability, cargo capacity, and even passenger comfort. The basic design eliminates much of the rough ride characteristic of crew/supply vessels ; comfort has been improved further by placing the lounge at the center of gravity in the hull.

Mr. Sachse's idea for the PSO-I and ultimately for the Audrey came in the early 70s as offshore drilling was becoming more important.

Rigs were being operated farther from shore, and new boats with greater cruising range and more c a r r y i n g c a p a c i t y were needed to service them. For the most part, new boats were simply longer and more powerful versions of the old designs.

But Mr. Sachse wondered if the designs being used provided the optimum in seaworthiness, carrying capacity, speed, and economy.

"In looking back," he says, "it became obvious that the basic crewboat design was influenced heavily by the World War II PT boats. Unfortunately, other shortcomings aside, these craft were known for their rough riding characteristics.

"Still, the earlier 65-foot crewboats were speedy and quite seaworthy craft, and the older skippers wondered why they rode better than the newer and considerably considerably larger vessels. The one major reason for this is the larger aspect ratio of those 65-footers. What actually happened was that with every increase in length of the conventional crewboats, their beam did not follow in proportion.

Large amounts of power are then necessary to drive such an outof- proportion vessel at planing speeds. The result was that with every increase in length the aspect ratio decreased, and herein lies one of the key problems of the crewboats before the PSO-I." A "narrow" boat suffers under several shortcomings, Mr. Sachse notes. An uncomfortable plunging motion, lowered pounds-pers q u a r e - f o o t carrying capacity, slowness to plane, and a diminished ton-mile-hour factor are the major faults, he explains.

Before the first line of the PSO-I was drawn, Mr. Sachse did detailed calculations to ensure proper proportions and ratios to eliminate the faults of the "narrow plane" vessels. Design of engine installation and propeller rotation were vital, too. He chose a quad arrangement over the triple design, and counter-rotated two of the four propellers to provide extremely clean flow of water under the hull.

The naval architect credits Gulf Craft, Inc. of Patterson, La., for its structural design work on both vessels. The hulls are constructed of a closely webbed system of l i g h t w e i g h t L frames and H stringers with a "stressed skin" plating. The result is a light but extremely strong vessel constructed in a manner resembling that used in aircraft construction.

The PSO-II is a 97-foot by 24- foot true monohedron craft. The aspect ratio of her plane computes to 0.33 against an average of 0.25 for the conventional crewboat.

Her dry displacement is 53 tons; with a continuous output of 3,400 bhp, the bhp per ton dry amounts to 64, which is an excellent value for a commercial vessel of this type.

With a deck load of 30 tons and fully fueled she displaces 95 tons, giving her a cruising speed of 30 mph, which is true planing for her size—an S/L ratio of 3.3. The deep vee of 18 degrees allows a smooth ride in a choppy seaway.

The below-deck passenger lounge in place of on-deck passenger cabin allows the pilothouse to be moved farther aft for better sea-keeping ability, and creates an aft cargo deck area of more than 1,000 square feet.

Vessels must be able to complete a trip in 12 hours, according to U.S. Coast Guard regulations, or carry a second skipper, adding greatly to operating expense.

The design cruising speed of the Audrey allows her to turn around within 12 hours, and thus her owner can run her up to seven trips a week. And that, adds her designer, is the single most important criterion for a fast, offshore supply and passengercarrying vessel. 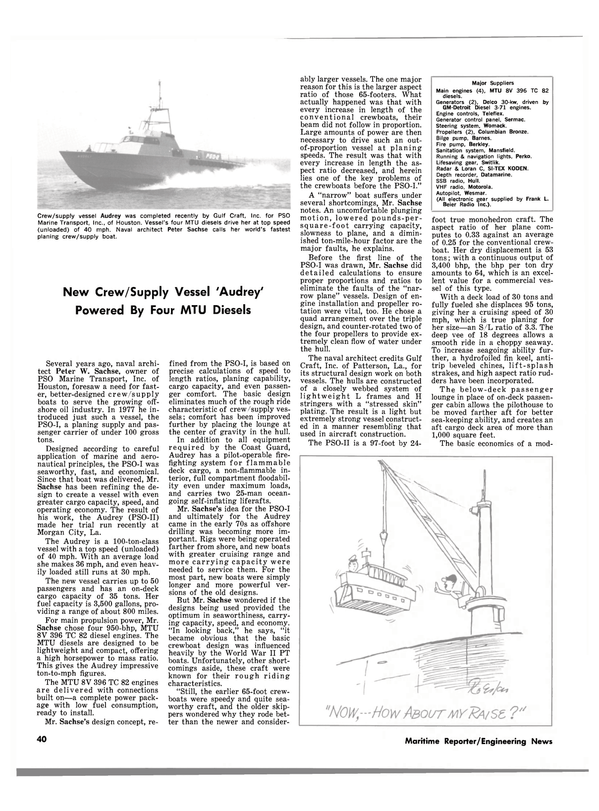